Israel Adesanya defended his UFC middleweight title by defeating Yoel Romero by unanimous decision of the judges. The fight turned out to be a very dull affair.

Israel Adesanya has been in professional kickboxing for a long time. He was not a big star. In his last fight, in 2017, he lost by a deafening knockout to Alex Pereira. His MMA career has developed in parallel and as a result has been more successful than in kicking, which can already be stated. 18 wins, 0 losses – with this record he came to the fight with Romero. Until two years ago Adesanjo was known only to those who follow MMA very closely – and not just the UFC – and now he is a superstar.

Romero is the 2000 Olympic silver medalist in freestyle wrestling and the 1999 world champion. He could also have won a medal in Athens 2004, but lost the bronze medal to Sajid Sajidov. In 2007 Yoel won a tournament in Germany. He did not return to Cuba. In Germany, Romero began his career in MMA – his first fight in 2009, at age 32. Then he went to the United States. Romero made his debut in Strikeforce, but the promotion was bought by UFC owners, and everything went smoothly for the Cuban there.

He won eight straight drills and moved up to the title fight with Robert Whittaker. Romero lost. He lost to the Australian in the rematch as well. Yoel was also defeated by Paulo Costa. However, the Brazilian was injured and Romero was given another chance to fight for the title. There were disgruntled: how is it that a fighter has two losses in a row and is fighting for the title? But the UFC bosses took into account that both fights with Whittaker and moreover the fight with Costa were very even.

I’d like to say that in Las Vegas we saw a classic – puncher vs. fighter. But that’s not really the case, given that Romero in MMA knocks his opponents out in the standup.

The co-main event of UFC 248 was the title fight between Weili Zhang and Joanna Jędrzejczyk. The girls put up a chop, throwing 351 meaningful punches for two – the third highest total in league history. The bout between Adesanya and Romero turned out to be quite different.

First round. Suffice it to mention the statistics: the Cuban threw four strikes, the New Zealand Nigerian three. Romero hooked Adesanya hard with a left. That was it. We didn’t see anything else interesting in the first five minutes. Yoel stood his ground, Yisrael was afraid to go forward.

Round two. The pattern of the fight didn’t change. Adesanya didn’t have any sharp moments, Romero had one – when he jammed his opponent at the net for a moment and hit him hard a couple of times.

Round three. Adesanya became more liberated – he picked up the key to Romero. He’s throwing more jabs, low kicks. He didn’t shake the Cuban once, but he absolutely took the round. Yoel ended up with a take-down, which didn’t count because he couldn’t hold his opponent.

Round four. Referee Dan Miragliotta urged the fighters to fight, “Give the judges something to judge you by.” Israel’s low-kicks did the trick – Romero’s front leg began to wobble. The 42-year-old martial arts veteran didn’t respond in any meaningful way. Adesanya was moving away from his opponent’s line of attack.

Fifth round. Romero stepped up, hooked Adesanya several times with his left, called for a takedown at the end… But it was clearly not enough to win. As a result the champion won by unanimous decision of the judges.

So Romero’s gameplan was to stand still and wait for Adesanya to lunge at him with an open guard? A counter-puncher to Adesanya who has never done that? A ridiculous excuse. But the Cuban was applauded. Although he deserved to be whistled just as much as his opponent. 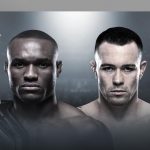